FATHER OF THE MODERN HEBREW LANGUAGEPART 2: THE VISIONARY 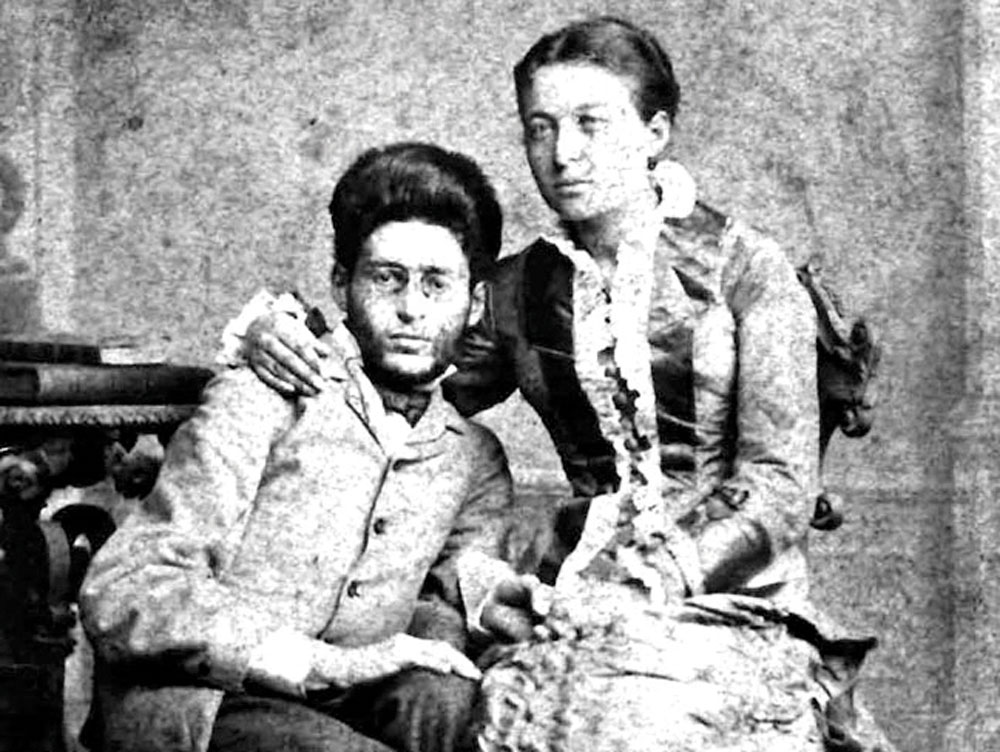 Ben Yehuda and his wife Devora in 1882, soon after their arrival in Jerusalem.

When Eliezer Ben Yehuda decided to leave Europe for Jerusalem in 1881, there was not a single person in the Holy Land, or any place else in the world, who spoke Hebrew as their mother tongue.  There was no such thing as everyday, spoken Hebrew—only words to be read from the Bible and rabbinical passages.

But Eliezer fell in love with the Hebrew language. Moreover, he saw it as the tool to recreate a united Jewish people who would return to their ancient homeland. Even stranger, he seems to have been the only human being in the world who grasped the connection between the language and the land.

He had plans to marry Devora Yonas, daughter of a well-to-do family, now in Russia, who had unofficially adopted him when he was a 14-year-old orphan.  But then to his great dismay, at age 23, his dreams shattered when he was diagnosed with tuberculosis.  He wrote Devora’s father, Solomon, telling him that he could no longer marry his daughter because the doctor said he might only have six months to live.  He decided he must live in Jerusalem and finish out his days there.

To say the least, Solomon, Devora’s father, was relieved to receive Eliezer’s letter.  They all loved Eliezer as part of their family, but there was no way their daughter could marry a sick man on his way to a desolate far-off land.

But when Solomon broke the news to Devora, she would not hear of it.  She told her parents that she was going to marry Eliezer!  She had waited for seven years to marry him and nothing was going to stop her now.  Her mother, Rivka, was beside herself.  How could she let her daughter go to that God-forsaken land with a dying man?

SHE LEFT WITHOUT A PASSPORT

Amazingly, her father finally acquiesced.  He saw the love she had for her man, and he decided to let her go.  This was indeed a remarkable family.  They arranged for her to meet Eliezer who would be in Vienna a week before he left for Jerusalem, and in two days she was smuggled out of Russia without a passport.

Eliezer was delirious with joy. He wrote in his diary:

“Not my sickness, nor a life of sorrow which seem to be my lot, deterred her from her desire to share my life.  Our lives had become one, and the first Hebrew family in modern times had come into being.”

When they met in Vienna, he told her about the change in direction his life had taken under the influence of Tchatchnikof, his Catholic mentor who had turned the young idealist into a political activist.  Now, convinced of the truth of his vision, he was ready to write and publish his ideas—all in the Hebrew language which he was still then learning.

He told his wife-to-be, “Devora, you are going to be the first Hebrew mother in nearly two thousand years.  Our child will be the first infant in all these centuries who will come into the world hearing nothing but the beauty of our ancient language!”

And then came reality.  He told her there were certain conditions to the success of his life’s mission. His words to Devora went something like this:

“I must ask you, dear Devora, that from now on you shall speak only Hebrew.  We must set an example for our people, for those who would come after us.  Hebrew must live again!  It must become more than just a language of literary exercise!  We must run our home in Hebrew, bring up our children in Hebrew, make love in Hebrew—and if we fight and argue, even that we must do in Hebrew.”

She answered, “But I really don’t know any Hebrew, dear!”  He insisted, “Until you do—keep quiet in Hebrew.”  On the spot, while still in Europe, he began teaching her words in Hebrew.  This is a “tree,” a “window,” a “street,” a “lantern.”

ON THEIR WAY TO JERUSALEM

In the fall of 1881, the new couple, accompanied by Eliezer’s Polish friend, Tchatchnikof, stopped in Egypt, and found a Rabbi to marry them.

They arrived in Jerusalem, a city of 25,000, of which more than half were Jewish.  They were overwhelmed by the utter squalor and wretchedness of the city.  Open sewers and a stench everywhere.  And they were practically penniless. But Devora was as unique a person, as was her husband.

The zeal of the prophets became her zeal, too.  She was Eliezer’s wife now, and soon she would fulfill her love’s desire.  She would become the first Hebrew mother in modern times.  She would have many children, and they would be the first children in nearly two millennia to speak Hebrew from birth! 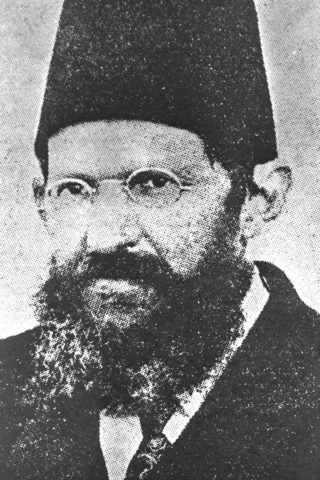 Dov Frumkin, editor of “Havatzelet” (The Lily) in Jerusalem who offered a job to Ben Yehuda.

Because several of his Hebrew articles written in Europe had been published in a Jerusalem journal, the publisher, Dov Frumkin and his family, were awaiting the arrival of Eliezer and his wife. In one of those “chance”  happenings, Frumkin told Eliezer he was leaving for six months to sell subscriptions to his newspaper in Russia and offered him a job on the spot as assistant editor.  He would have a salary equivalent to $5.00 a month.

In one stroke of fortune, Eliezer believed he could provide a livelihood for himself and his wife, and launch a journalistic career.  “The trumpet,” he said, “was put to his lips to sound the blast of liberation.”  He announced, “I have called for a war to recapture Israel’s land and language.”  This would be his life’s work.

He immediately perceived that the greatest blockage to his goals was the extreme alienation among the tiny groups of religious Jews in Jerusalem.  He decided he would take it upon himself to bring them together in unity so that these great goals could be achieved.  He would become religious himself!

While privately admitting that many of the Jewish traditions were old-fashioned, and others had nothing to do with the Torah or Judaism, he and Devora both took on the yoke of the Torah, keeping a kosher home, the Sabbath and the Holidays, going to synagogue and observing the traditions of Judaism. He grew ear locks and a long beard. He prayed every morning with his prayer shawl and phylacteries. He thought religious discipline would be a binding agent for Jews everywhere.  Anything to bring the Jews of Jerusalem together!

But alas!  The Orthodox saw Ben Yehuda as a pagan and an enemy of the Jewish people because he was defiling the holy language of the Bible and using it in everyday language.  They could not imagine using this language to say, “Take out the garbage!”  And they became Eliezer’s fierce and violent enemies throughout his life.

The Ben Yehuda family moved into their first rented house.  It faced the “Wailing Wall,” but they had to cross through seven dirty courtyards ankle-deep in debris to reach it.  And to reach their rooms it was necessary to climb a rope ladder.

Even more depressing, he and Devora had few friends in Jerusalem.  There was a couple heading a Jewish charity from England, Michael Pines and his wife, who befriended Eliezer and Devora. Because of a religious (but not extreme) upbringing, they knew enough Hebrew to communicate. The four made a pact to only speak Hebrew to each other.  For Ben Yehuda, ever the visionary, “that evening was the beginning of the revival of Hebrew as a common spoken tongue in the Land of the Fathers!”

He should have known, however. His Hassidic employer, Dov Frumkin, hated the Pines because they were part of the anti-Hassidic stream.  And for Devora, because she was absolutely forbidden to speak in any other language, she found herself alone most of the time.  Instead, she spent time practicing words and sentences that Eliezer wrote down for her.  She would wait for him to come home after work at night for another Hebrew lesson.

The community of 16,000 Jews in Jerusalem was a “generation of separation.”  Each little group spoke in the tongue of the land from which it came, isolated from one another. Their various Ashkenazi Rabbis (from Europe) had the utmost disdain for the Sephardic Jews (from Islamic lands). And each little community spoke their own language. 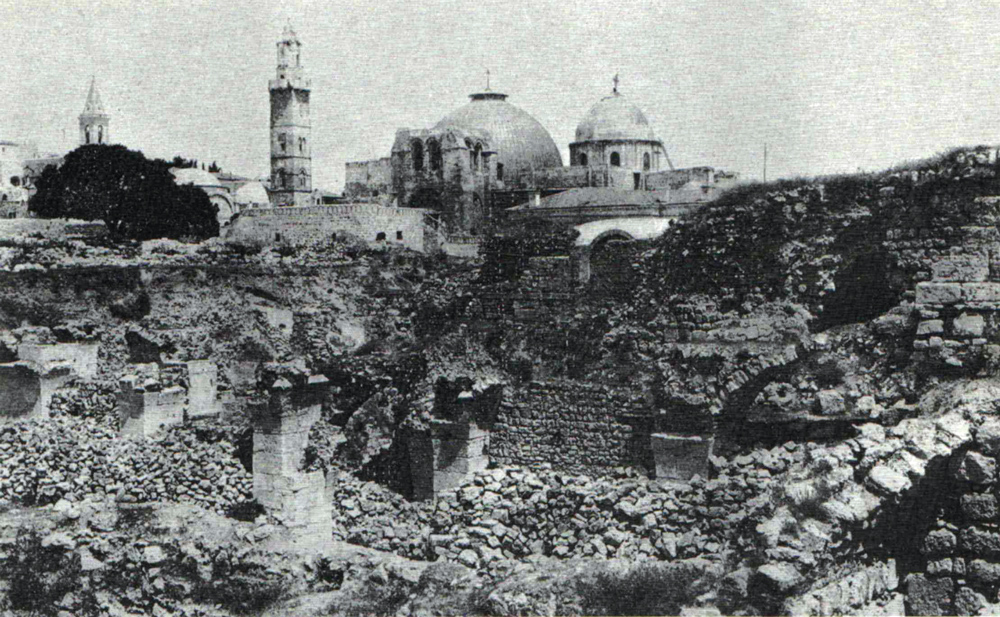 ROTHSCHILD INSISTS ON FRENCH IN HIS SCHOOLS

Baron Edmond Rothschild was the greatest philanthropist of Israel’s pre-state days.  Through his charity, Alliance Israelite Universelle, he purchased property for settlers near the Jaffa area, gave farmers vineyards and wineries from French grapes, and built a school in every new settlement.

But for him, the national revival of Hebrew as the national tongue was a pipe dream! In fact, the whole idea of multitudes of Jews making aliyah to Israel was pure fantasy. Yes, he would help the poor in the Holy Land, but the French Baron demanded that French be taught as the main language in all his schools! He simply saw Hebrew as a dead language.

Eliezer wrote a stinging article, a call to war against Rothschild’s Alliance, in which he saw him as a dangerous enemy to the whole concept of a national revival in the land of Israel.  Yes, the Alliance was practical. Rothschild wanted to prepare these students to be able to function anywhere in the world.

But Ben Yehuda’s vision was completely different:  the resurrection of the land and the language of the Jewish people.  Years later, he wrote,

It would seem that in the history of nations there are times when the realists cannot lead properly, and only the dreamers, those who do not take facts into account can cross the impregnable boundary of reality and create a better reality for the nation!

Ben Yehuda had a dream and a passion.  That’s all he had.

To be continued next month.

Other articles in the Ben Yehuda series:

Part 7: The Secret to His Success

Epilogue: Eliezer Ben Yehuda: A Roadmap to the Impossible

The entire series in one place