Alphabetic inscriptions on an ancient stone slab have been identified by a researcher as Hebrew. A drawing of the slab’s inscriptions shows early Hebrew letters next to corresponding modern Hebrew letters (green). (Photos courtesy of Douglas Petrovich.)

The Bible says Moses wrote down the Law of God and gave it to the children of Israel.  It was immediately accepted as authentic by his successor, Joshua, and all God-fearing Jews, down through the centuries.

However, modern critics are convinced that Hebrew flourished no earlier than 1200 B.C.  Modern scholars agree that different Semitic languages are problematic to tell apart in their earliest stages, so it is difficult to ascertain which might be the beginnings of early Hebrew.

The issue is, when did the children leave Egypt? And did Moses write the Torah in the Hebrew language? According to the Old Testament, Israelites spent 434 years in Egypt, from 1876 B.C. to 1442 B.C.  And there is no Jewish tradition that the Law of Moses was written in any other language than Hebrew. 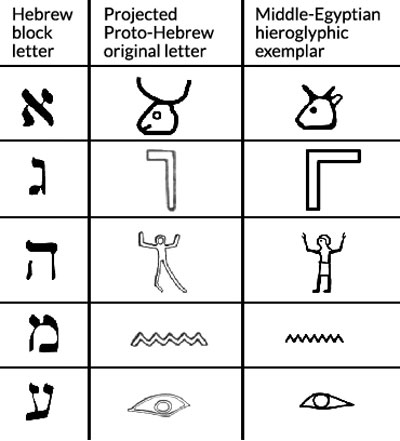 “There is a connection between ancient Egyptian texts [hieroglyphics] and preserved alphabets,” Petrovich said.  Scholars have generally assumed for more than 150 years that the oldest alphabetic script known (which Petrovich studied) could belong to any of several Semitic languages.

But Petrovich says his big break came in January 2012.  While conducting research at the Egyptian Museum in Cairo, he came across the word “Hebrews” in a text from 1874 B.C. that includes the earliest known alphabetic letter.

With his entire fledgling alphabet, he translated 18 Hebrew inscriptions from three Egyptian sites.

Several biblical figures turned up in the translated inscriptions, including Joseph, his wife Asenath, and Joseph’s son, Manasseh.  Moses is also mentioned.

Of course this possible breakthrough will not be met with excitement by many  epigraphers, who doubt that Moses ever existed!  But Petrovich believes he has discovered Hebrew in its earliest form!

Other articles in the September Maoz Israel Report:

· Translating this Bible into Hebrew