ISRAEL SHOOTS FOR THE MOON! 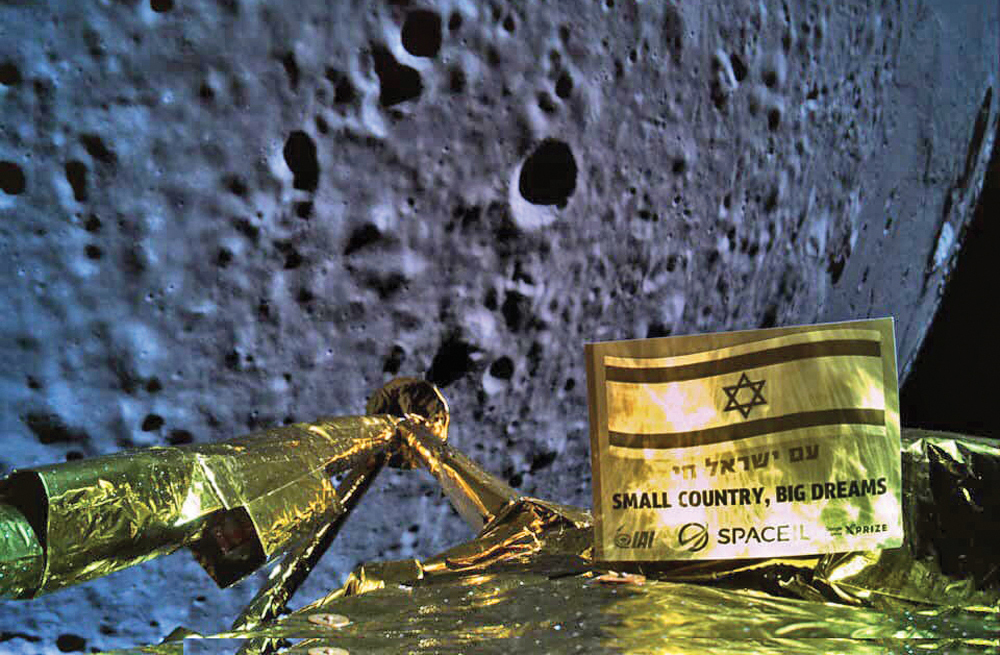 Beresheet takes a selfie as it begins its descent to the moon’s surface (Credit: Beresheet / spaceil.com)

Yariv Bash never quite fit the mold of success. He graduated from a public high school with mediocre grades. But that was largely because he was busy getting a college degree in computer science. In those days, the IDF hadn’t yet realized that the best minds – the kind that should be in a room processing strategic military ideas – aren’t easy to identify on paper. So the army sent him to an elite combat unit.

That was quite fine with him. He was an adrenaline junkie anyway. He loved extreme sports – motorcycles, snowboards – and thought nothing of the risks when he jumped off a cliff with a hovercraft he built himself. “The army,” he said, “helped me understand who I was. It showed me I could push myself past what I thought were my limits.”

When he was released from the army, he was invited to work for a governmental branch of Research and Development. One of their annual projects was to come up with an entirely unnecessary invention, simply for the sake of encouraging thinking outside the box. Yariv suggested the idea of making a spaceship out of plastic that could make it to the edge of space. They would take a picture and call it the first Israeli spaceship.

That night he visited a friend and shared his idea. His friend told him about a Google Lunar challenge that was offering 20 million dollars to any private company who could successfully put a spacecraft on the moon by 2012, maneuver it a bit on the surface and send back pictures. It felt like destiny for Yariv and that night he purchased the domain spaceil.com (IL is the official abbreviation for Israel). The next day he wrote on Facebook, “Who wants to go to the moon?” A bunch of people laughed. Two of his friends, Yonatan Damari and Kfir Winetraub wanted in.

The three made a presentation and went to see the chairman of the Israel Space Agency. “You won’t land on the moon by 2012; the spacecraft will need to be larger than what you have drawn here, and it’ll cost more than your proposed eight million dollars – but I’m with you,” responded the chairman after watching it. He would be proven right on all counts and he would be very instrumental in getting SpaceIL off the ground.

Within months, the three would meet several eager investors who would literally help them “shoot for the moon.” The lunar craft called “Beresheet” (Hebrew for Genesis) would end up costing $100 million, but that would still be by far the cheapest craft ever sent to the moon. 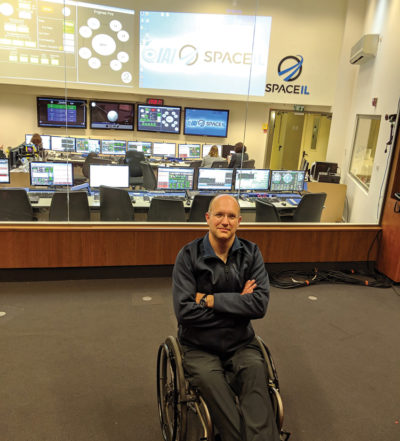 A SETBACK OR TWO

Due to interest from teams all over the world, the Google Lunar X challenge would be extended several times from the original 2012 deadline. SpaceIL was the only Israeli team to enter and was one of only five teams to make it to the finals and the first to launch their spacecraft. Despite the notable progress by the teams, Google refused to extend the 2018 deadline any further and the $20 million dollar prize money would go unclaimed. SpaceIL, however, considered this only a side disappointment. They would continue in their mission to the moon.

The bigger blow had already come in the winter of 2016 when Yariv, the ever lover of extreme sports, went on a snowboarding vacation in France with his buddies. Going down a mountain with deep snowfall, he noticed a hidden rock too late to go around it. He attempted to jump over it and landed right on top of it – spine first. The disconnect was so instant, he had to physically feel for his lower body with his one working arm to make sure it was still there.

As Yariv was rushed into emergency surgery, everyone involved in the space project – the investors, his work partners, the project volunteers – held their breath. But all Yariv could think of in his semi-conscious state was, “What have I done to my family?”

When he finally gained consciousness, the doctors said he would never walk again. He felt crushed. When he awoke again, his wife was at his side. “It’ll be okay,” she said, “Lo kara klum.”(Hebrew for, “No big deal, it’s nothing.”)

It would take months of rehabilitation and some explaining to his young kids why he wouldn’t be able to run around the basketball court with them, but Yariv bounced back as passionate as ever.

The day he went back to work he posted on his Facebook page, “First we land on the moon, then we’ll fix my legs.” 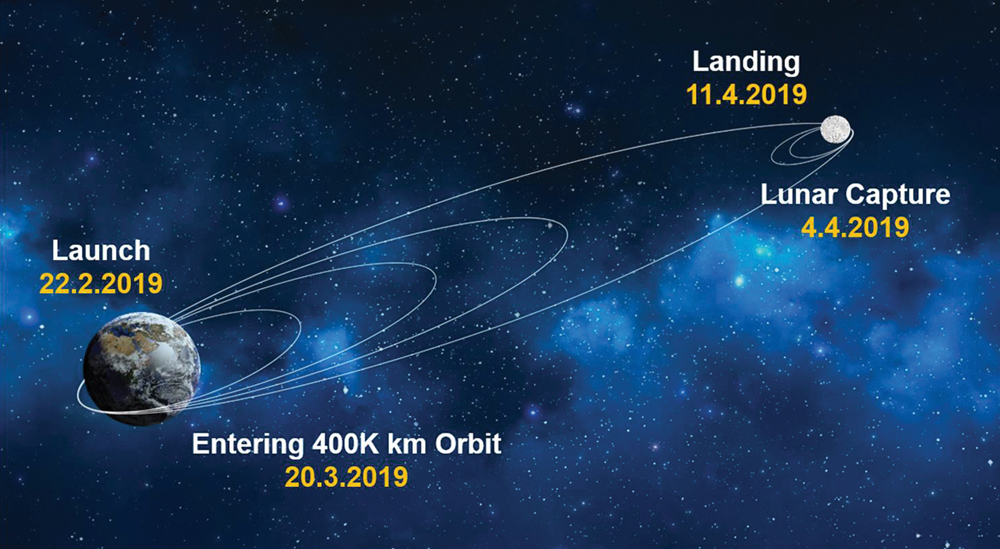 THINKING OUTSIDE A STRAIGHT LINE

If Israelis do anything well, it’s figuring out cheaper ways to do what other countries do with big bucks. We often joke that a damaged tank in wealthy nations will be treated to a fully-equipped garage and a million dollar budget, while an Israeli tank will have to make do with some paperclips and superglue. It’s a bit of an exaggeration, but Israel’s limited resources and limited living and working space has always pushed creative minds to figure out ways to do things cheaper and smaller.

Before the Beresheet project, all lunar spacecraft had taken a straight shot from earth to the moon. This required the spacecraft to be built a certain way, including huge caverns to hold fuel. The Beresheet took a more round-about approach – actually an elliptical orbit. It would begin by orbiting the earth, each time using just enough fuel to push out into space a little more, and allowing the orbiting power of gravity from the earth and moon to do the rest. Once their elliptical orbit got out far enough, the engineers would catch the gravity of the moon and orbit the moon until they deemed it safe to land. This process took about two months. 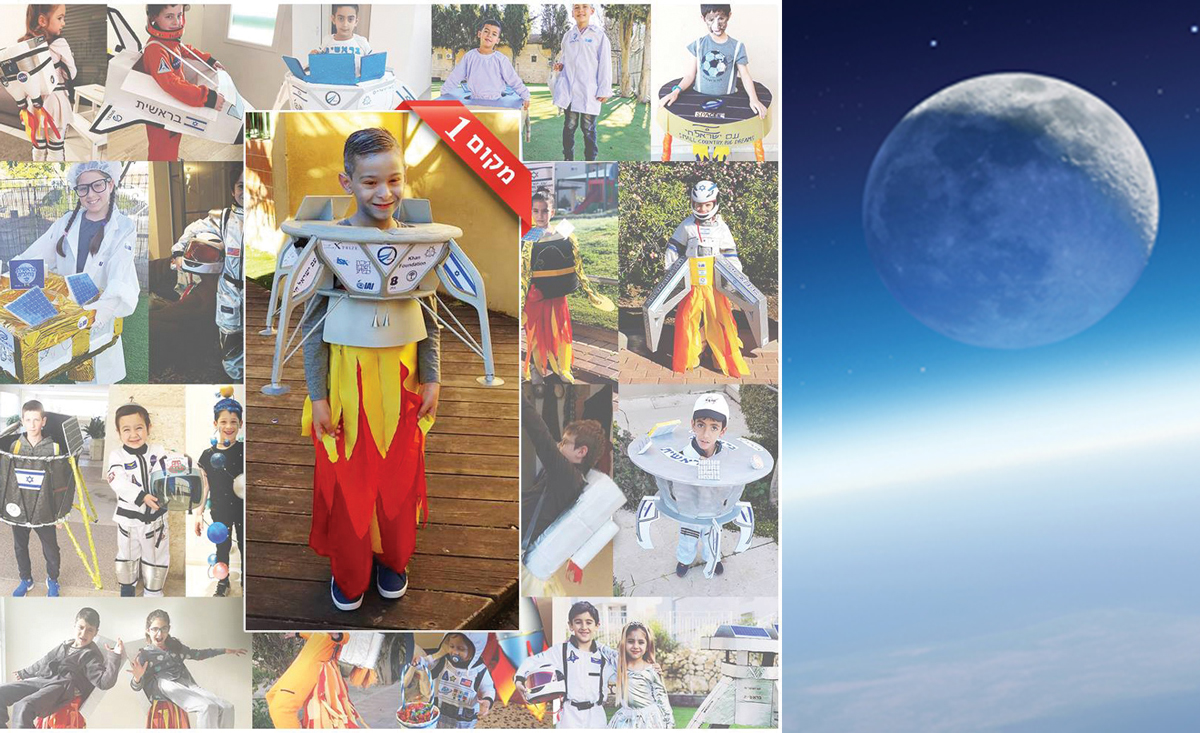 The excitement children were experiencing was evidenced during the past Purim – as the spacecraft was already in orbit, costumes like this with the SpaceIL logo were seen across social media.

IT’S NOT ABOUT US, IT’S ABOUT THEM

Somehow ingrained deep in the Jewish mind is that the only thing sweeter than success is being able to bring others along with you in your success. SpaceIL wouldn’t just be a private project focused on making it into the history books as the 7th nation to orbit the moon and the 4th to land on it. This project would be about inspiring a generation to – if I may – dream beyond simply becoming a famous pop star. SpaceIL wanted to recreate the “Apollo Effect.”

When the Apollo 11 landed on the moon in 1969, there was an explosion of interest in STEM careers (Science, Technology, Engineering, Math). Everything from GPS to advanced prosthetic limbs, to the kidney dialysis machine, to the smoke detector would be invented as a direct result of technology developed for Apollo 11. But the biggest winner was the American economy that benefited from the influx of skilled workers and consumers excited to use the newly-available technology. So impactful was the flood of development and inventions from that time period that the phenomenon was coined the Apollo Effect.

In 2011, SpaceIL was officially formed as a non-profit and the development budget would include educating kids as the project progressed. By the time the shuttle launched, they had reached almost a million children in Israel through national exhibitions and volunteers who would visit local schools.  By the time they would attempt their moon-landing two months later, the whole nation would be watching. 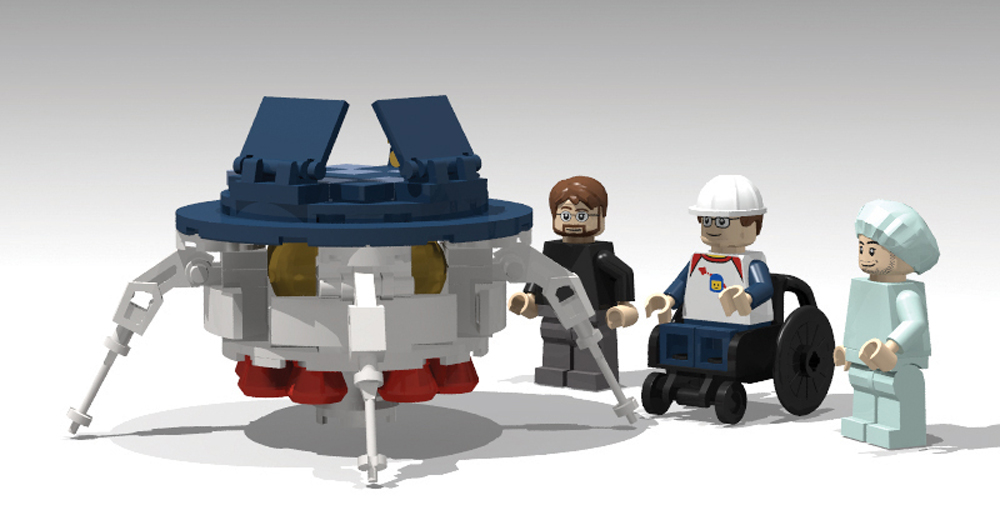 While on a personal level, the paralysis hasn’t been easy for Yariv, it has only offered more inspiration for disabled kids to dream. Even the proposed Beresheet Lego kit includes a wheelchair figure.

Recently, Google announced themselves as the first company to launch a commercially viable drone service. However, if they had Googled it, they would’ve discovered that Yariv’s company Flytrex had already offered this service for two years in Iceland. In fact, some of the technology Flytrex used for its drone system went into the building of the spacecraft.  This gave Yariv extensive experience in communicating with a remote flying object.

Flytrex commercial drones, however, don’t land remotely. They are designed to lower the purchased package and return home. For SpaceIL, the greatest challenge would be the landing –mostly because there was no way to properly test the spacecraft before it got to the moon. Also, with such a small craft at such a huge distance, there would be no “real time” ability to communicate. Any command could take long minutes to be received by the craft, which meant by the time an urgent command would be received by the lunar craft, it would be irrelevant.

Therefore, for the landing, they decided on a fully-automated program. Using a static set of commands and incredibly limited fuel, Beresheet would land itself on an area of the moon known for its strange magnetic field (for the purpose of studying it). When the moment came to exit orbit and begin descent, the main engine turned off for some reason. By the time the signal reached it to turn back on, it was too late. All communication was lost, and everyone knew what that meant. 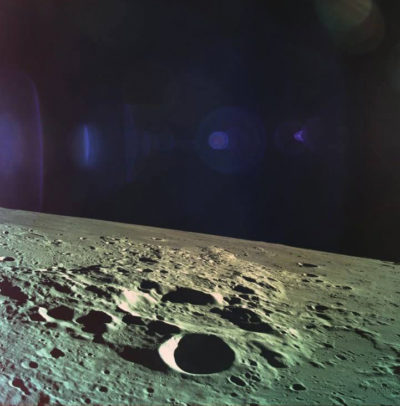 After the disappointing announcement, applause erupted in the main hall where Israel’s Prime Minister Bibi Netanyahu and dozens of others sat watching everything unfold. “We made it to the moon, just not in the way we’d hoped.” Bibi then got up, looked them straight in the eye and said, “If at first you don’t succeed, you try again.”

Less than 24 hours later, SpaceIL stood in front of the cameras and announced their plans to build Beresheet 2.0. They were determined to try again.

Some people said the spacecraft would’ve been better named “Chutzpah” – a word known around the world meaning gall or audacity. That Israel would try to accomplish something that up until this point only the U.S., Russia and China – all world powers – had accomplished, took some nerve. That they could get out of bed the next day determined to try again took incredible grit.

After all, haven’t we always been a small people with a big God?

The LORD set his heart on you and chose you, even though you didn’t outnumber all the other people. You were the smallest of all nations. There was almost nothing to you. Deuteronomy 7:7 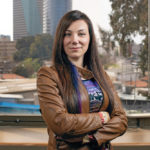 Shani and Kobi Ferguson are the daughter and son-in-law of Ari and Shira Sorko-Ram.

Kobi and Shani are transitioning to become directors of Maoz Israel Ministries within a three-year period.

They live near Jerusalem with their five children, age 3-14.

Light of the world for the light to the nations

Indeed, God has kept His promise and made Israel a light and a blessing to the nations.  The vast majority of people today use at least one thing that Israelis invented.  Yet, together with thriving minds, 99% of Israelis still do not know Yeshua as Messiah… Just like you, we want to change that!
DONATE