· IstandwithIsrael.com: A Seamstress in Need Received!

· Host Israeli Backpackers in Your Home

THE GOLAN HEIGHTS PART 3A SUMMER AND WINTER WONDERLAND 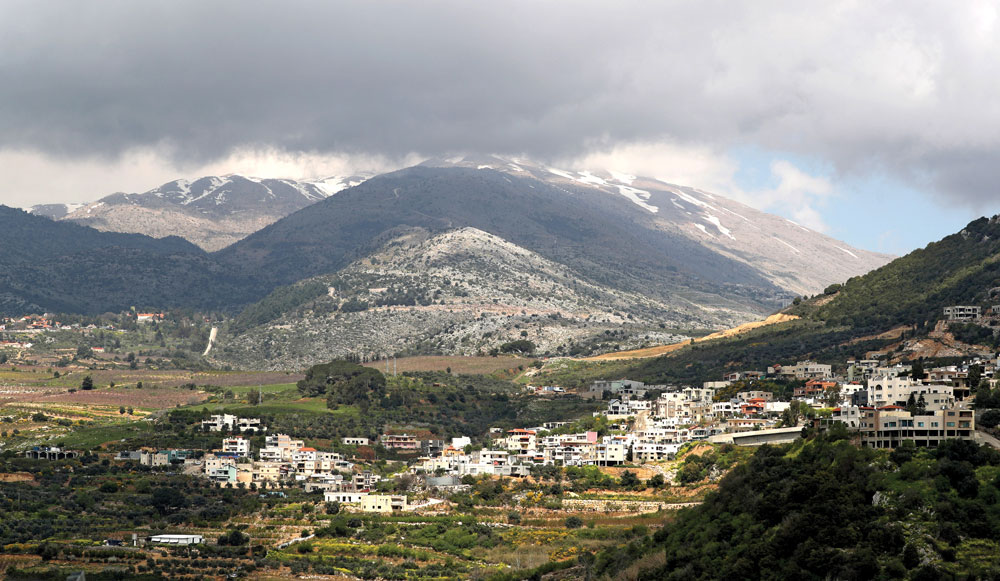 Ein Quiniyye, one of the four Druze villages in the beautiful Golan Heights annexed by Israel. (Photo: Reuters)

When President Donald Trump publicly declared the Golan Heights to be part of the State of Israel, there arose a hue and cry from many European and Muslim countries, and, of course, the UN – all of whom cried foul.

The UN quoted its own Resolution 497, in which the Security Council declared that Israel’s annexation of the Golan Heights, is “null and void and without international legal effect,” and therefore, Israel must rescind its action.  That was in 1981, three days after Israel declared approximately two-thirds of the Golan as now part of the sovereign State of Israel.

Nevertheless, the same UN position is still in effect today.  One of the leading conservative candidates of the upcoming election for a new British Prime Minister, Jeremy Hunt, condemned Israel saying, “We should never recognize the annexation of territory by force.”

What the world doesn’t recall is that for the first two decades of Israel’s nationhood, it was the Syrians who used those Heights to continually attack Jews living below them in Galilee.

Nor did they remember to mention that twice the Syrian tanks rolled down the slopes of the Golan Heights with the assignment to conquer northern Israel and destroy the state of Israel.

Furthermore, the UN ignores the fact that in the year 2000, Israel’s Prime Minister Ehud Barak, worked hard to return the Golan Heights to Syria in exchange for peace.  The sticking point was Syria would accept nothing less than a border up to the Sea of Galilee, Israel’s main source of fresh water. There was no way Israel could agree to such an arrangement.

During the Syrian civil war in 2011 – 2018, 400,000 Syrians were slaughtered by their own government, and 6.1 million displaced while another 5.6 million fled the country altogether.

No matter.  Israel must, according to the UN’s definition of “international law,” hand over the Golan Heights to Syria’s President Bashar Assad.

Yes, as outlandish as it is, every year, right on time, the UN passes a resolution demanding Israel turn over the Golan Heights, along with its 27,000 Druze citizens to the Butcher of Damascus.  Of course, Israel, full of disgust for the UN’s total lack of concern for the Druze, if not the Israelis living there, has never considered withdrawing from the Golan Heights for a minute. 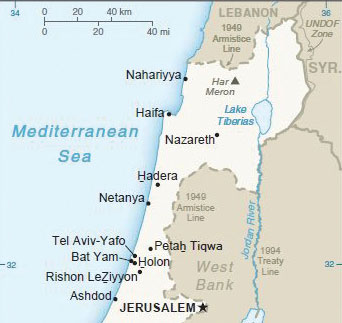 Outside of the eternal bias and knee-jerk double standard the UN continually applies to Israel, what can we learn about the Golan Heights in the real world in which Israel lives?

First, a simple statement:  If Israel were to give the Golan Heights back to Syria, it would be an act of self-destruction.  Syria and its allies, Hezbollah and Iran, would put into action a plan to use the Golan as a staging area to attack the Jewish state until it was destroyed.

It is now more serious than ever, as the worst-case analysis scenario for Israel is a war in the north against Hezbollah, Syria and Iranian militias.  Israel fears a new northern front from which commando and missile attacks can be launched against Israel.

So, believe it or not, Israel’s possession of the Golan Heights even strengthens Israel’s position in defending Jordan from Iranian attempts to undermine the stability of the Hashemite Kingdom.  Jordan borders Southern Syria, and shares the Israeli interest in keeping the Iranians out of that area.

Yet with all these facts, it is still worthwhile to discuss the international legal rationale of Israel incorporating the Golan Heights into its sovereignty.

The highly respected Harvard professor, Alan M. Dershowitz, states categorically, “No country in history has ever given back to a sworn enemy militarily essential territory that has been captured in a defensive war.”

The Harvard emeritus professor of law calls the European Union a hypocrite when it comes to Israel.  He recalls that at the end of the first and second world wars, European countries made territorial adjustments to help preserve the peace – a necessity they refuse Israel today.

Dershowitz states: “No reasonable person would ask the Israelis to give the Golan Heights to the Syrian mass murderer Assad.  It would be suicidal to hand off the high ground overlooking northern Israel.”

Sure, if Syria became a democratic peaceful state alongside Israel, there might be reason to reconsider giving this land to Syria.  But who can imagine, let alone predict, that the Islamic government of Syria would agree to end all belligerency and recognize Israel as the nation state of the Jewish people?

In other words, Dershowitz argues that Israel’s possession of two-thirds of the Golan Heights actually increases the chance for peace, since Syria or Hezbollah does not have the high ground at their disposal to attack Israel. 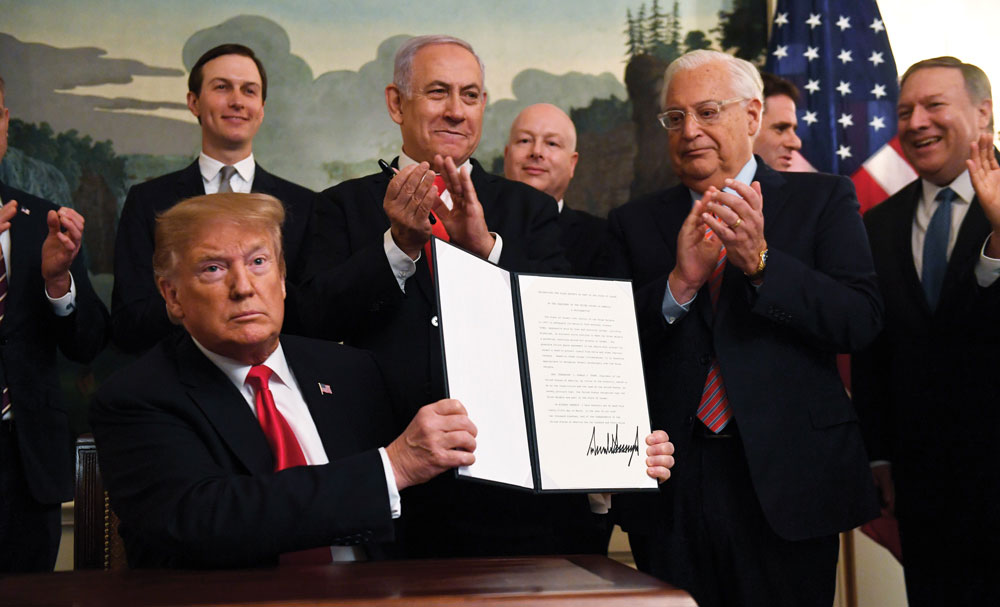 Another point:  the Golan has no Arab refugees.  There are no “classic Muslims” living on that quite empty land – only about 27,000 Druze who claim Moses’ father-in-law, Jethro, as the founder of their religion.  The Druze do not follow the Quran and, therefore, do not have a natural hatred of the Jewish people.

There are no Palestinians in the Golan Heights, and the Druze residents don’t protest Israel.  Even while a civil war rages next door, the Golan is tranquil.  In fact, of the other 116,000 Israeli-Druze citizens who live mostly in Galilee, a higher percentage of their young men serve in IDF combat units than do Jewish citizens!

The Druze living in the Golan Heights reside mostly in four picturesque villages. Several thousand have asked for Israeli citizenship.  Others have been ambivalent because of close relatives in Syria, and, furthermore, they have been afraid Israel might one day return the Golan Heights to Syria. In that scenario, Druze who have taken Israeli citizenship would then face terrible retribution.

However, as they have watched their Syrian relatives, without food at best and being slaughtered at worst, during the seven-year Syrian civil war, many more are applying for Israeli citizenship.

On March 21, 2019, on the Holiday of Purim (celebrating when the Jews were saved from Haman’s order to kill all Jews), U.S. President Donald Trump tweeted that the time has come to “fully recognize” Israeli sovereignty over the Golan Heights. It was another monumental shift in U.S./Mideast policy by his administration.

“After 52 years, it is time for the United States to fully recognize Israel’s sovereignty over the Golan Heights, which is of critical strategic and security importance to the State of Israel and regional stability!” Trump tweeted.

As you might guess, according to statistics, Trump is more popular in Israel than in any other nation of the world. 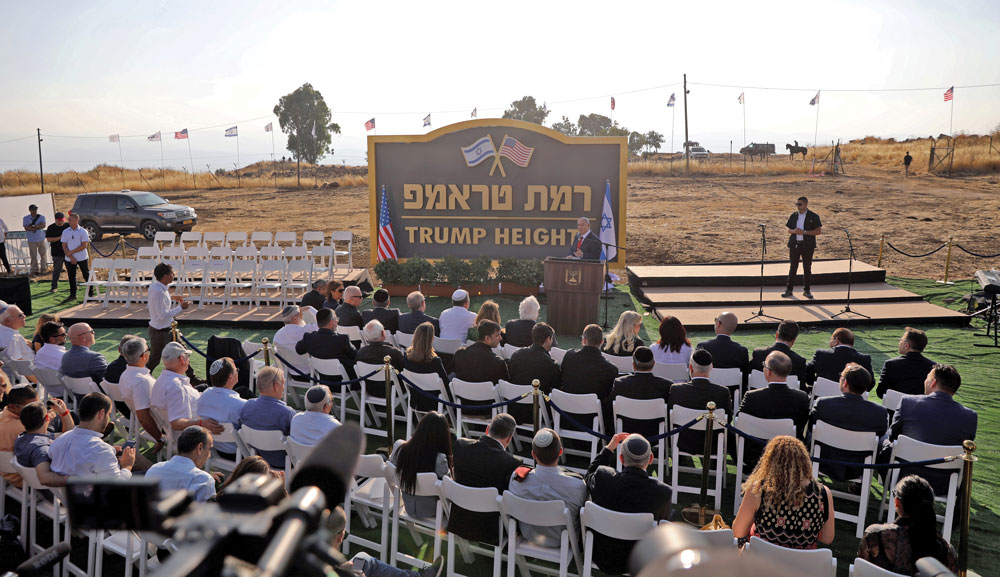 Israeli Prime Minister Benjamin Netanyahu gives a speech before the newly-unveiled sign for the new town of “Ramat Trump,” or “Trump Heights” in English, named after the incumbent U.S. President during an official ceremony in the Israeli-annexed Golan Heights on June 16, 2019. (Photo: Reuters)

Since America’s recognition, Israel’s government has gone into high gear drawing up plans to accommodate 250,000 more Israelis migrating to the Golan by 2048.  Right now there are 22,000 Jewish Israelis living in 33 towns and villages in the Golan – the largest being Katzrin with 7,000 residents.  The Ministry of Housing plans to build 30,000 housing units, two more towns, provide 45,000 new jobs, and invest in infrastructure related to transportation and tourism.

Israel also plans to clear 20,000 acres of minefields in order to prepare for commercial and housing development projects and tourism.

Tourism! Do you know that the Golan Heights already boasts 95 hotels, hostels and B&B’s in some of the most luscious surroundings anywhere? Do you know you can climb up or ski on the 9,232 ft. Mount Hermon, as you look 40 miles east into the city of Damascus? Or stay in a hotel overlooking the Sea of Galilee to the west? Just go to booking.com and type in Golan Heights!  Even the Druze have gotten into the hotel business!  I want to get up there myself!

With Ari, of course!

IstandwithIsrael.com: A Seamstress in Need Received!

Host Israeli Backpackers in Your Home