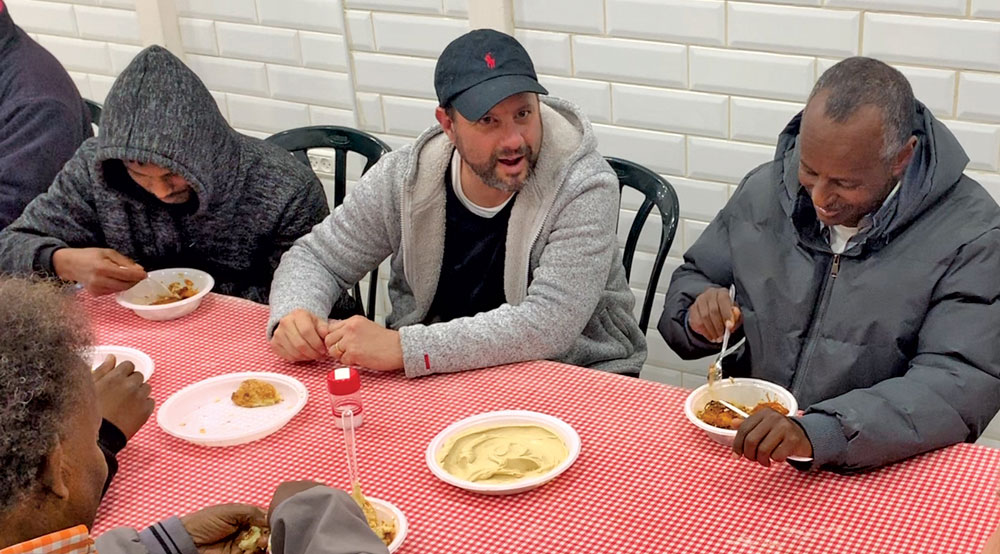 In the darkest places, the light shines the brightest.

Congregation Tiferet Yeshua sits on the border between Tel Aviv’s booming financial center and southern Tel Aviv, home to some of the poorest, most marginalized and needy communities in the country. When we began going out into the streets several years ago to witness and pray for people, we were faced with the dire situation of many who were close to our congregational facilities. God put it on our hearts to reach out to them, so in December 2017, we began Project Feed Tel Aviv. We prepared pots of warm, home-cooked meals and headed out to Tel Aviv’s central bus station—one of the worst areas in Israel, dubbed “Israel’s capitol of crime”—a place where the homeless and drug addicted end up along with illegal foreign workers and refugees from Africa. It’s a place of brothels where both women and men who are  enslaved by the sex industry meet their clients and drug dealers. In short, it’s a place where sin, darkness and hopelessness reign. Since our commission is to show the love of God to our city, we decided this was the place that needed us most.

Every Thursday we bring everything we’ve prepared to a soup kitchen in one of the hardest areas. We’re there from the early evening until late with a nourishing meal, warm clothes, worship songs and the Gospel of Hope. On Fridays, a couple from our congregation, together with other volunteers, cook dinner and serve it out in the open for those who don’t have a place to eat. Friday night dinners in Jewish culture are a symbol of family, warmth, and togetherness. So, every Friday evening, in the middle of a public park next to the central bus station, rain or shine, the homeless can come and have a home-cooked Friday night meal and be ministered to with love, care, prayer and the Good News.

A MATTER OF LIFE AND DEATH

Having met so many people this last year, we’ve found the common denominator between all of them is their hopelessness; people are convinced God has cursed them and condemned them to live as the dregs of society. Hundreds of times we’ve prayed with people to encourage them and to ask God to reveal His love to their hearts and to show them how valuable they are to Him. One time we prayed for a drug-addicted woman who was utterly broken; she had been through countless hospitals and rehab centers and felt there was no one left to help her. She had nearly passed out on a park bench, literally crying out in her pain and misery. We witnessed to her about the power of God to save her, and when we prayed, an amazing peace came over her. The look on her face completely changed. A few days later we were back in the area, and heard she had died. I don’t know if she had passed away that same night after we witnessed to her and she prayed with us, but I do know that the Lord sent us that day in order to bring her a critical message of hope. 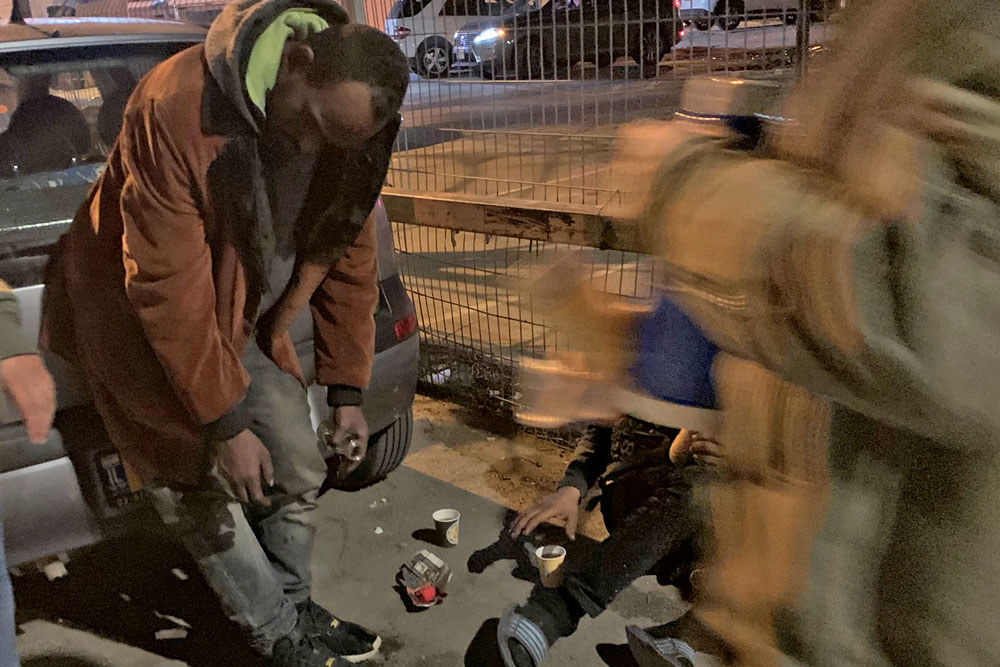 Moments after taking a hit of “Nice guys,” a cheap, toxic high from roach poison mixed with tobacco, this man went into a zombie-like state. 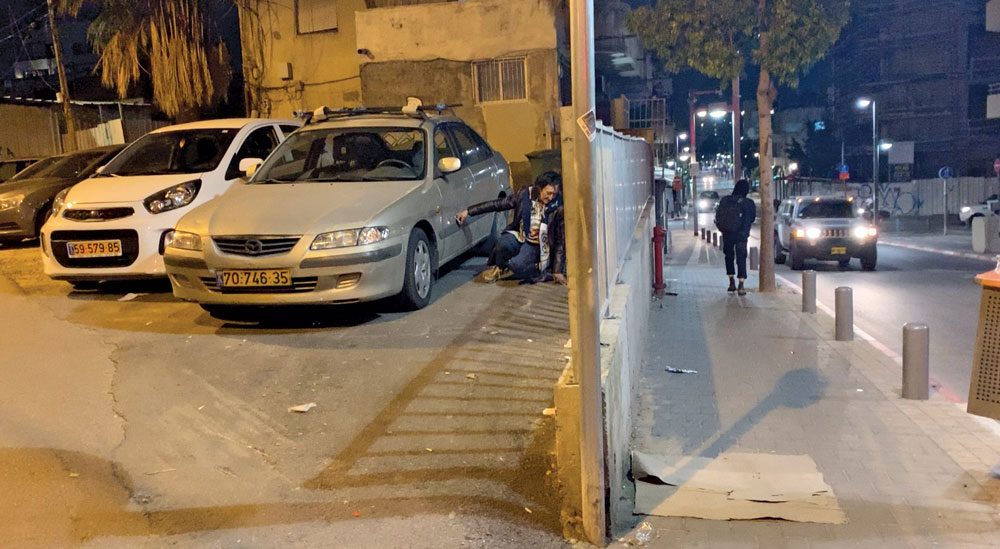 A MAN LOOKING FOR A PROSTITUTE FINDS A WORD FROM GOD

Since drugs and prostitution are mainstays for the area where we minister, we run into people coming to purchase drugs or sex. One evening, a man who had come to the area to find a prostitute was intrigued by our presence and asked us who we were and what we were doing. After witnessing to him and sharing with him from scripture for quite awhile, this man, noticeably touched by our conversation, said, “I came here tonight because of my yetzer harah, (evil nature) looking for sex, but I received God’s word instead.”  He got in his car and said he was going home. 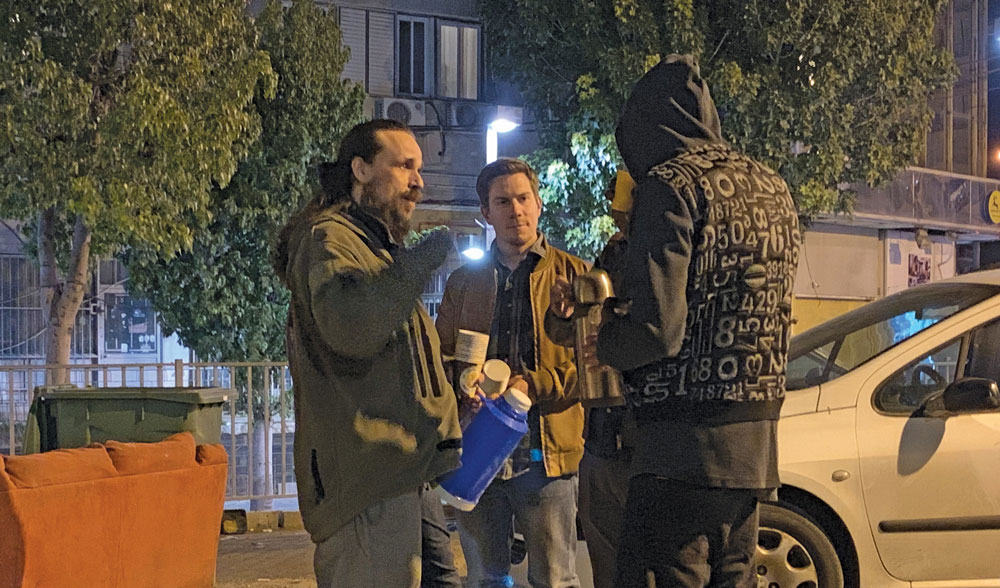 A HOMELESS MUSLIM MAN GETS HUNGRY FOR GOD

Almost every time we’re in the area, we run into Samir (not his real name), an elderly homeless man who usually sits in a wheelchair at a nearby junction, begging. I once asked him how did he, a Muslim, end up in Tel Aviv. Apparently, he was homeless in his village too, adding, “In my village, I was completely ignored and got no help whatsoever. At least here in Tel Aviv people have mercy on me and help me.” Samir would always talk to us and be pleasant, but he was completely indifferent to the gospel. Also, many of the drug dealers in the area are Muslim, and he was careful not to attract their attention by getting into conversations with us about faith.

Then in December 2018, a group of students from the Bible School Glaubenzentrum in Germany were serving with us at the outreach when one of the young women saw Samir and felt she was supposed to pray for him. As we stood there on that cold, drizzly street corner, the young woman prayed for Samir in English, I translated, and Samir said he was being filled and surrounded with warmth. Ever since that day, he seeks us out and wants to hear more about Yeshua. I see him every week, and his hunger for God is growing stronger. He no longer cares who hears him talking about “Yeshua with those Jews.” He is not far from the Kingdom of God. 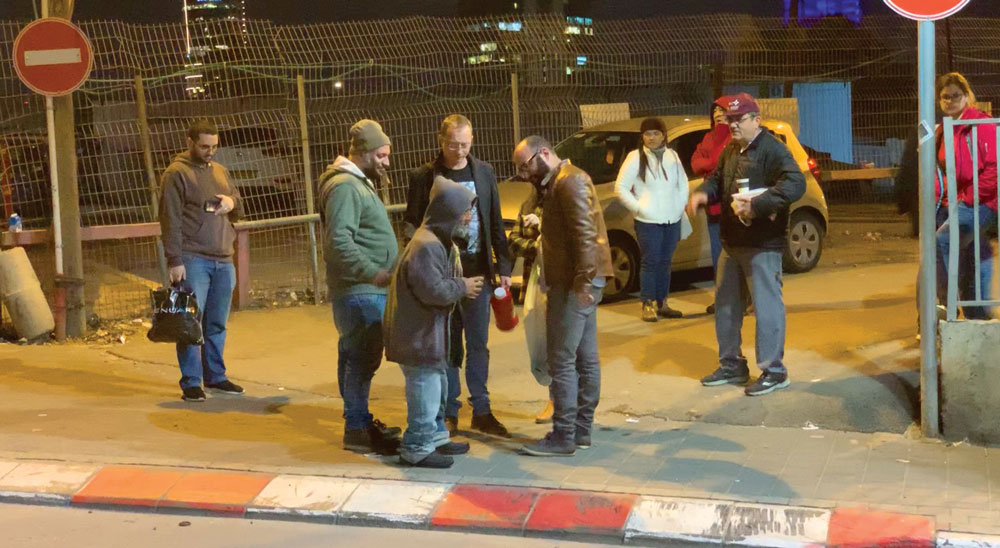 Volunteers from Tiferet Yeshua share a hot drink and the Good News with Tel Aviv’s homeless. 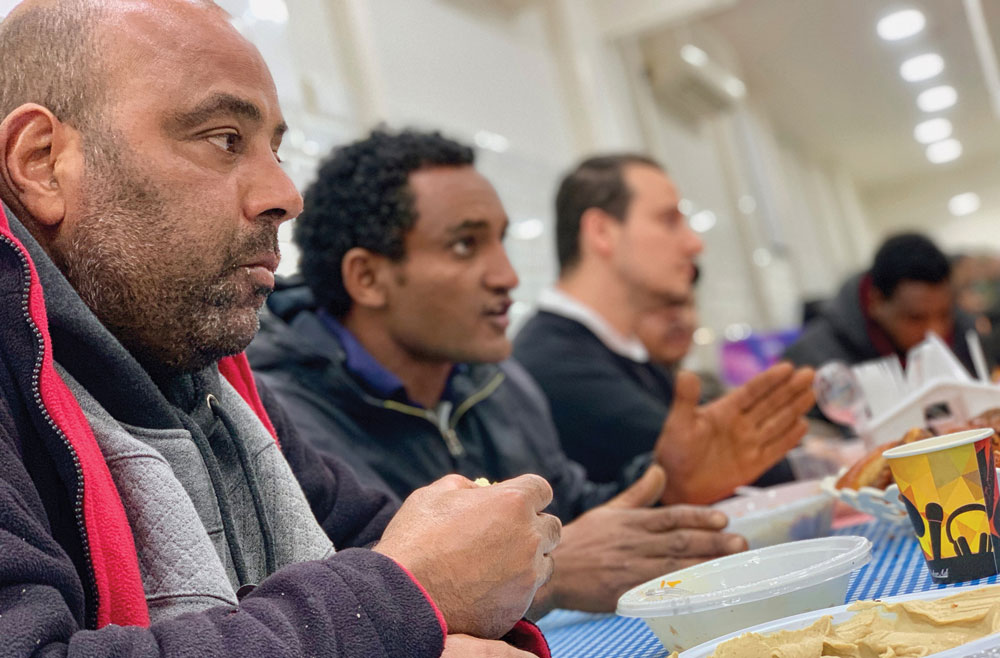 Volunteers from our congregation sit at the communal table together with the men from the street, making it more like a family meal where they not only get a nourishing, home-cooked meal, but they can open up and share what’s on their hearts, and be ministered to and prayed for. (Most everyone on the street has been exploited and abused in some way.)

OUR VISION FOR PROJECT FEED TEL AVIV IN 2019

This year we want to expand our outreach significantly to reach even more people. Right now, the space where we’re preparing all the food for the outreaches has reached its limits. Our goal is to serve one thousand poor and needy each month in our city with a warm meal, fresh vegetables or fruit, something to drink, and, in the cold winter months, warm blankets and clothing.

$1.50 will feed one person, $15.00 ten people. Through Project Feed Tel Aviv the Gospel will continue to go forth with the love and mercy of the Messiah to the most needy and will ultimately sound the loudest witness of Yeshua in our city.

‘I was naked and you clothed Me;
I was sick and you visited Me;
I was in prison and you came to Me.’
Matthew 25:36

Partner today with Project Feed Tel Aviv to bless the poorest of the poor in our city. 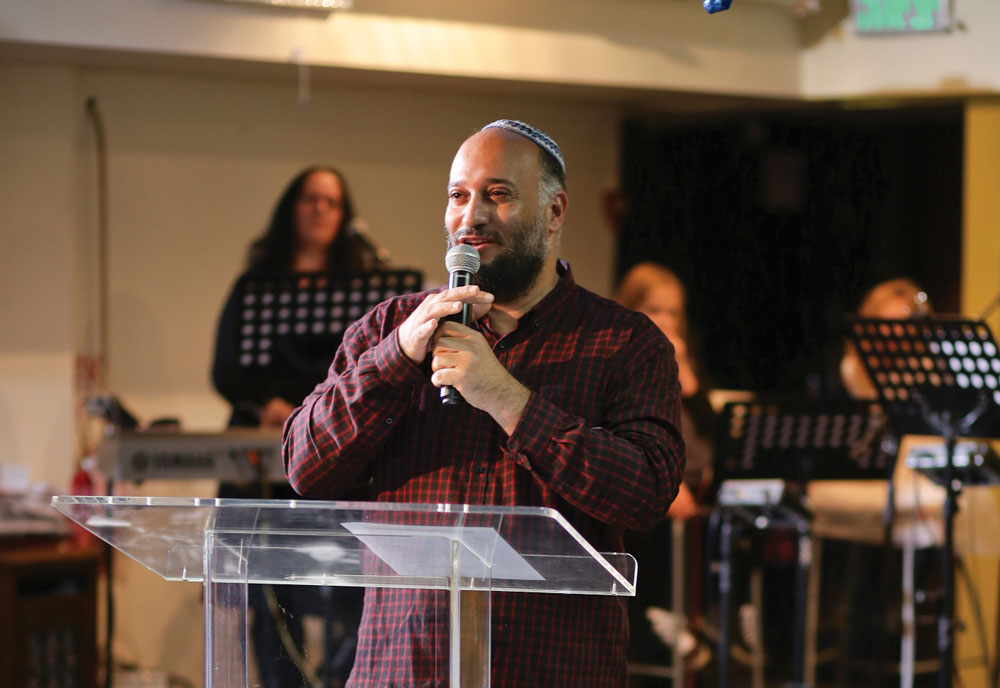 Moti Cohen, much beloved elder of Congregation Tiferet Yeshua, is the founder and organizer of PROJECT FEED TEL AVIV.

We wish you a very joyful Passover Season as we remember Yeshua’s death and resurrection and His gift of eternal life!

It is fitting, we believe, to share with you during this wonderful season of the year, how Congregation Tiferet Yeshua is reaching out to the hopelessly lost, the addicted and the homeless in our city of Tel Aviv.

When we founded Tiferet Yeshua some 25 years ago, the vision God had given us was for a Hebrew-language, Spirit-filled congregation with outreach as its primary focus.

We could hardly have dreamt what great things God had in mind for this congregation.  Our leaders, Pastor Gil and Tamar Afriat, are growing this Local Body in so many wonderful Spirit-anointed ways.  Tel Aviv, known as “sin city,” is fertile ground to sow the seed and harvest the fruit.

Another personal joy we have is that some 25 years ago, we met Moti Cohen, one of our very first Israelis who came to faith.  He was a teenager from a difficult background.  And today he is an elder at Tiferet Yeshua who has a gift to reach out to the lost, and is a great example and mentor to many new believers in the congregation.  He is the founder and organizer of Project Feed Tel Aviv.

It is amazing to see how young men and women, inspired by the leadership team at the congregation, are going out regularly to the streets of Tel Aviv to find the lost, the dying (literally), and bringing them food, clothing and sharing the love of Yeshua.

Moti and his team of volunteers are feeding about 400 needy people every month.  Moti is yearning to feed 1,000!

Feeding the lost and hopeless is part of God’s revealed plan to bring the love of the God of Israel and His Son, Yeshua, to the Jewish people.

Will you be an extension of the hands of Yeshua as we bring hope, life and everlasting joy to the hungry and destitute of Tel Aviv?

For the Lost Sheep of Israel,